It was a bit premature but had to be done - we entered our first race on the 24th August with the TT at Donington Park with the CSCC Modern Classics.

It was an early start and to shake things up it was raining for Qualifying! This was the first time we had driven the TT in the rain so it would be a learning curve, thankfully our car is 4DW!

Enven though the engine was still no where near full power we managed to punch way above our weight and qualify in 20th out of 28. The TT was awesome in the wet, four wheel drifing out of the corners in a very controllable fashion whilst many of the other more powerfull cars were sliding and spinning out of control - great fun!
It turned out that our wet lap times were around 12 seconds a lap faster then our relative dry rivals! 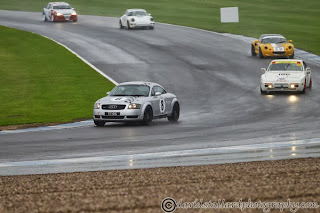 The race was in the afternoon and unfortunately it had dried up, it was a rolling start and our lack of power showed as all of the cars we had out qualified came zooming past into the first corner. 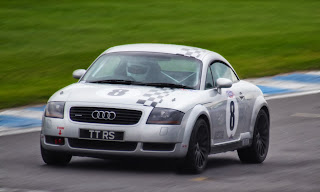 Then only one lap in something strange happen to the breaks, there was a loud knocking sound coming from the rear breaks? then the car started to slide around? After a couple of laps we pitted only to descover one of the rear break caliper bolts had come loose and the break caliper had damaged the wheel and created a puncture: 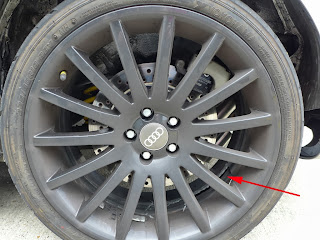 So unfortunately it was race over for us :(